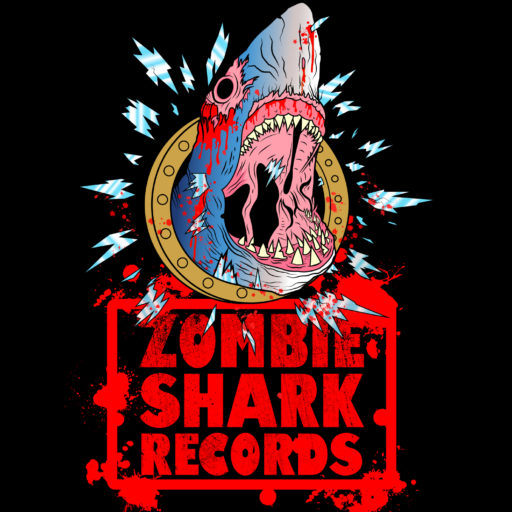 Keychain recorded their debut EP, Breaking Out, with renowned producer, mixer, and engineer Glen Robinson (AC/DC, The Rolling Stones, Gwar, Voivod,Annihilator, and Slaves on Dope). The recording was mastered by legend, Howie Weinberg, whose over 30 year career includes bands like Limp Bizkit, Sevendust, Deftones, Chevelle, and Disturbed. Breaking Out will be available, worldwide, September 1.

Commented Robertson, “The instant I saw the music video for “Prime Time” I knew I had to work with Keychain. It slams! I just knew this band was going somewhere. They have soul and passion and an undeniable groove. All four members quit their jobs to do a North American Tour. I can respect that! That’s how you know these guys are beyond dedicated.” 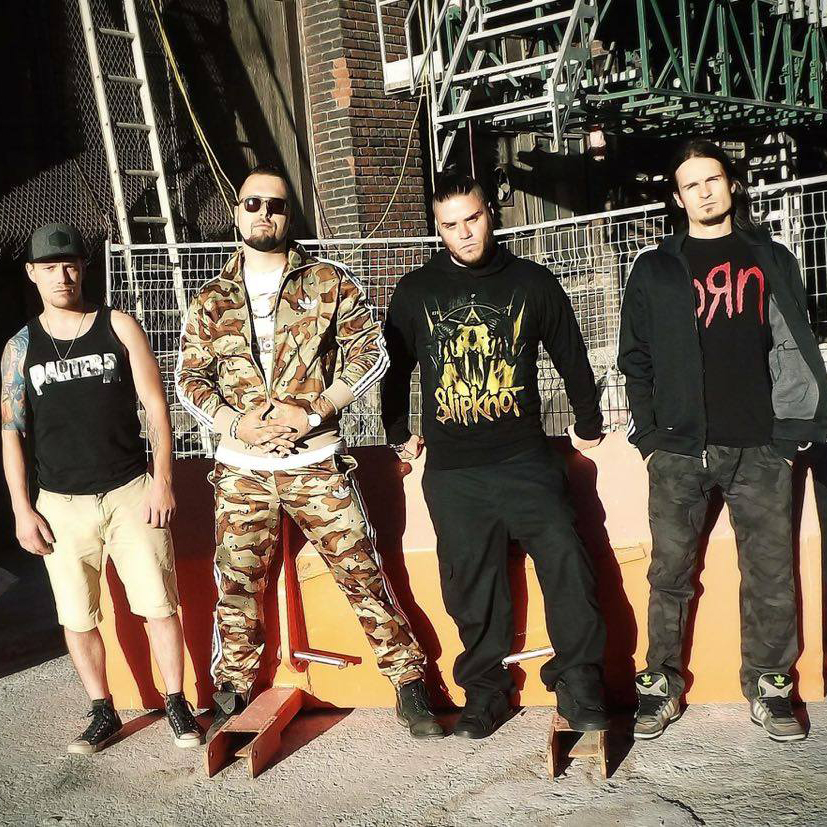 “Let us introduce you to Keychain, quite possibly the modern day answer to Korn, Limp Bizkit and Slipknot.” – Damnation Magazine

“Through “Prime Time” the band effortlessly stitches together various genres to create a sound that is quick to capture and demand the listener’s attention. The song seems to resonate an upbeat and energy packed feel that will have the listener head banging along in no time!” – Livingthevanlife

“They don’t seem to care what anyone thinks about nu-metal and just want to become the next Limp Bizkit or Linkin Park. As far as I’m concerned, they can. They certainly know how to make a contagious piece of music in great nu-metal tradition.” – Merchants of Air

Keychain have embarked on a six-week North American Tour in support of their debut release, which includes a few dates in Canada. 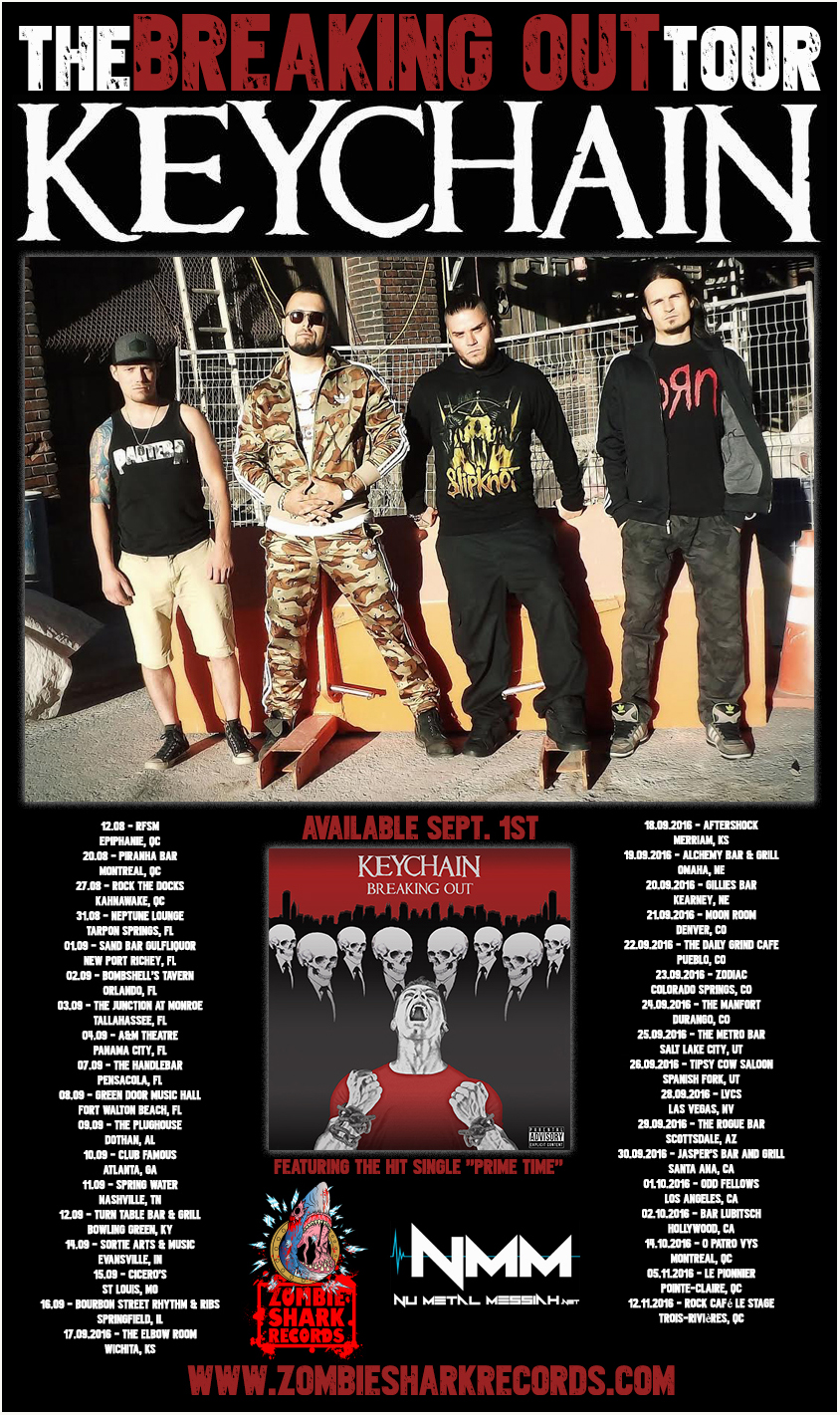 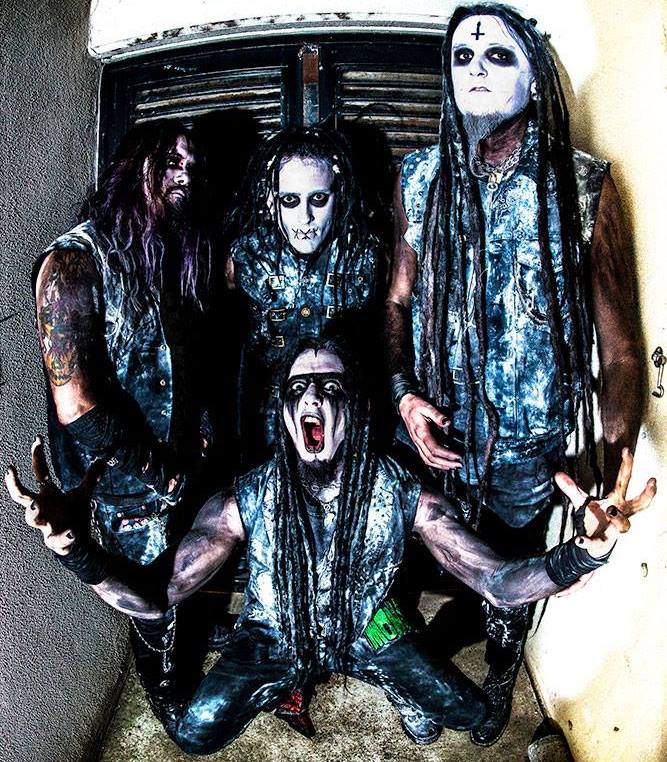 Robertson remarks, “I toured with Darkc3ll recently and they really impressed me! Watching them kill it every night, I left that tour with a lot of respect for those guys. Great look. Great live band! Love the vibe these guys put out!”

Darkc3ll is praised for their deeply industrial sound and is widely known for their highly theatrical appearance and stage show. The band has toured and performed with Wednesday 13, Combichrist, Otep, and recently toured the United States on the Civil Unrest Tour with Ill Nino, Straight Line Stitch, Davey Suicide,Motograter, and more. The band plans to tour Australia in support of their latest release. 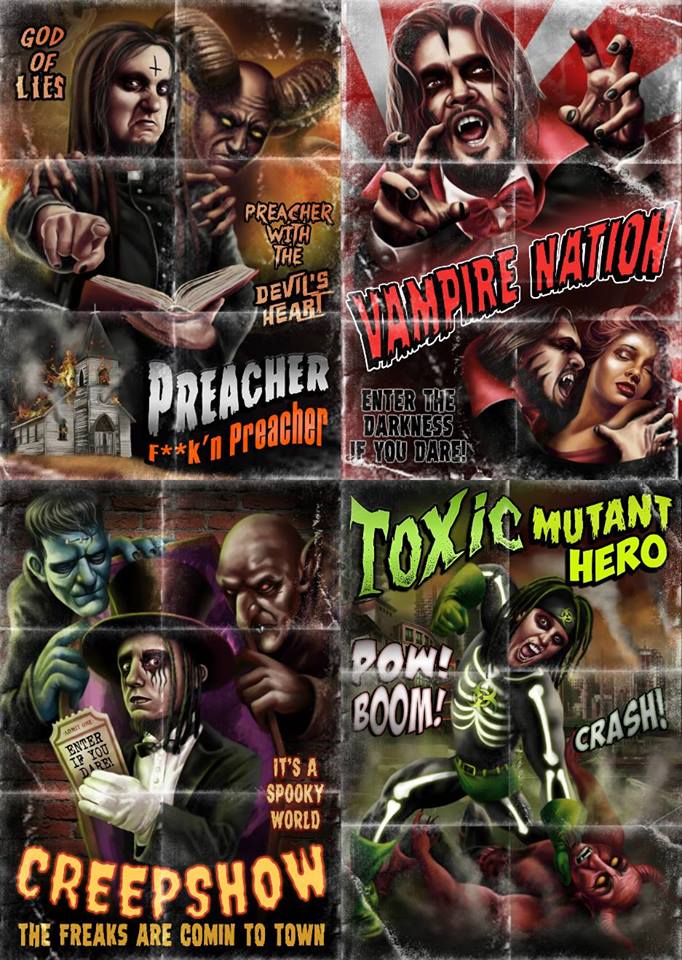 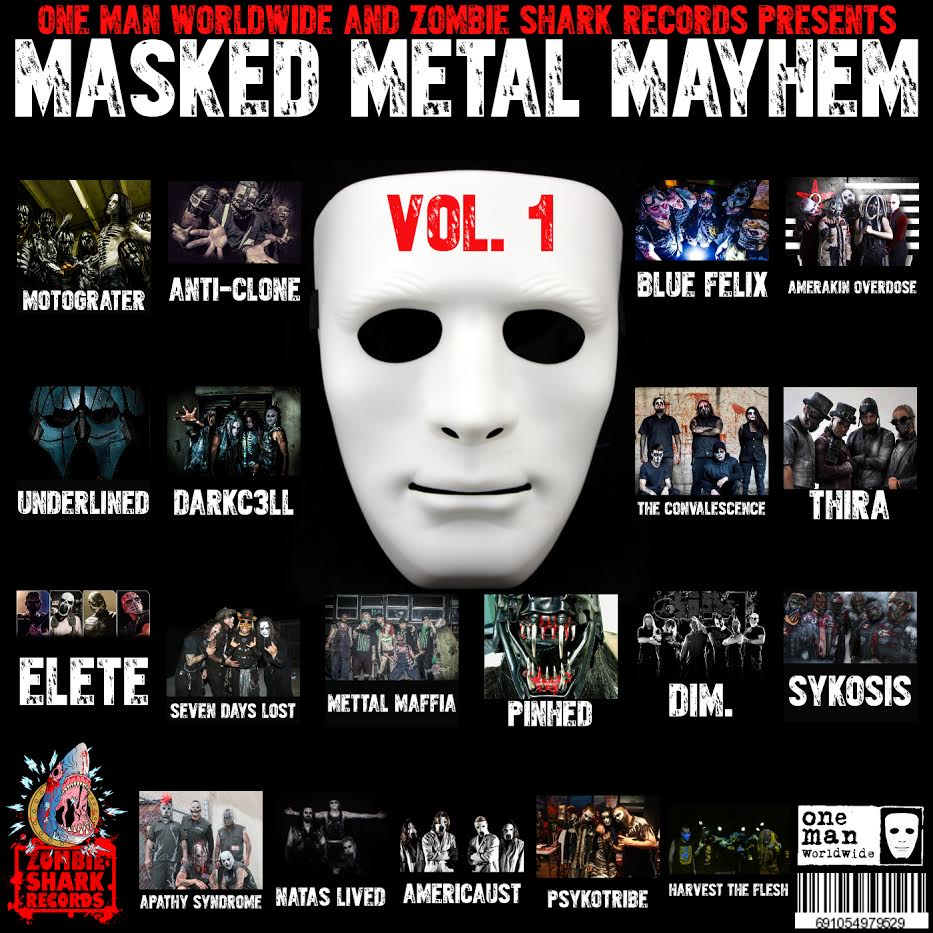 The label’s first unofficial release came in the form of a compilation album entitled Masked Metal Mayhem which features masked and painted bands and is available for free download at:

Robertson states, “I’ve always wanted to put something like this together. I’ve always been a huge fan of bands like Kiss, Gwar, Slipknot, Mushroomhead,Mudvayne, and Motograter. Bands with a unique image. I’m also a huge fan of bands like Nine Inch Nails, Ministry, Marilyn Manson, and American Head Charge. A lot of industrial bands have such a great look. I love it! Something about the masks and the paint and the theatrics, it just really draws me in. I saw Moto on Ozzfest 2003 and my mind was blown. The first real tour I ever went on was playing drums for the masked band Pinhed; opening up for Mushroomhead every night. I feel like it’s just something I was destined to do… be involved with this sort of thing. One of my biggest inspirations for all this is Steve Richards, the founder of No Name Recordings and No Name Worldwide. He managed both Slipknot and Mudvayne during their formative years and he also helped bands like Hatebreed, American Head Charge, Sworn Enemy, Motograter, and Mudvayne get their starts in the music business. He tragically died of brain cancer in 2004. He really inspired me to want to break bands. That’s why I created oNe maN Worldwide and Zombie Shark Records; to promote these amazing bands and to pay tribute to Steve. I think we are building something pretty cool here.”

Robertson has partnered with artist Wolf Krusemark, the creator of the Zombie Shark Records logo. Krusemark is known for his cartoon, comic book, and horror art creations which can be viewed at http://www.wolfkrusemark.com. The label will focus on shock rock, alternative metal, industrial metal, nu metal, and hard rock. 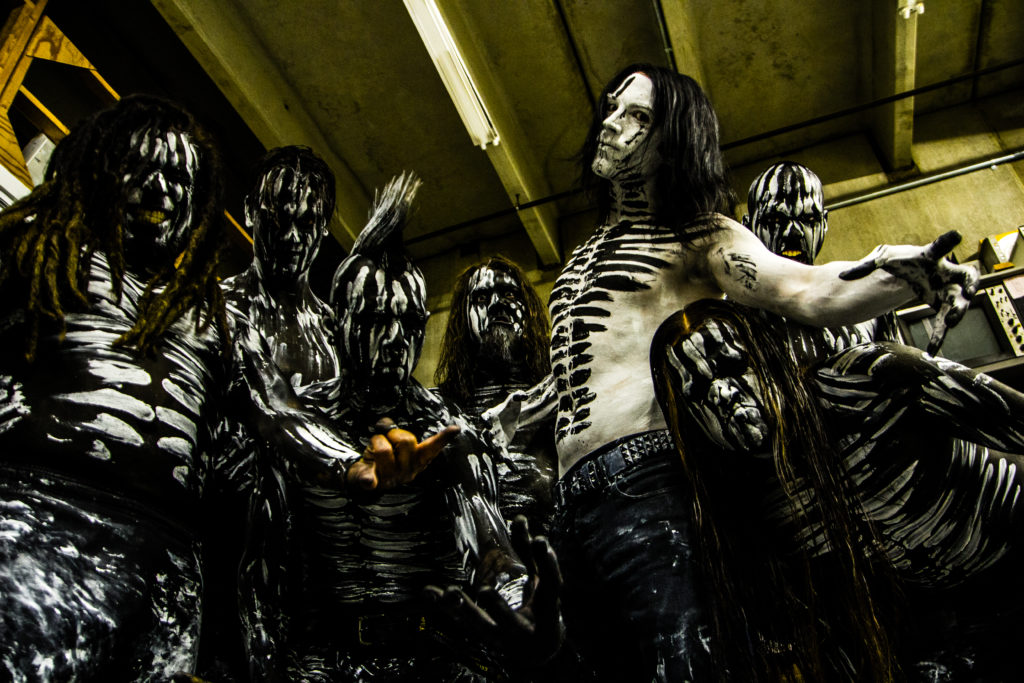 Motograter is soon to release their Sophomore album Desolation produced by Ahrue Luster (Ill Nino, Ex-Machine Head). The album is being mixed by Joshua Wickman of Dreadcore Productions (King 810, Within The Ruins) and Jon Berrier will also be assisting with production as well. Motograter recently completed a North American Tour with American Head Charge and is set to embark on a six-week North American Tour with Dope and Flaw beginning Sept. 13th, 2016.

In August of 2016, Thom Hazaert brought Robertson on as Marketing Director of EMP Label Group, the new record label from David Ellefson of Megadeth fame. Thom is currently serving as Director of Operations and Head of A&R at EMP and has been serving as a consultant for Zombie Shark Records.

Thom Hazaert is a well-known journalist, radio personality, artist manager, music and film producer, and label executive. He was co-founder and President of Corporate Punishment Records and currently runs THC : MUSIC. Hazaert’s work was influential in the early advent of street and viral marketing among rock acts, as an independent consultant for record labels including Flip Records,Interscope Records, Warner Bros. Records, Hollywood Records, Jive Records, and as co-founder of Total Assault Street Teams. Hazaert is the basis for the fictional character “Hazard”, set to be played by Bill Moseley (House of 1000 Corpses, The Devil’s Rejects, Texas Chainsaw Massacre 2), in the currently-in-development television series Hell Hunters.

Robertson says, “Thom is a badass, what can I say? It’s been really awesome working with him. The dude is a legend. And David Ellefson? He’s a heavy metal icon! Super down to earth and one of the nicest guys ever.”